Growing up on a dairy farm, we consumed plenty of milk, cheese and yogurt (and ice cream). Not being able to tolerate dairy well now has been a challenge. We found milk beverages we liked and started making homemade ice cream, but we went without yogurt. Yogurt was always a main ingredient in our fruit smoothies. We made them without, but I missed it.

Since we really enjoyed coconut milk ice cream, I started looking for information on how to make coconut milk yogurt. Coconut milk yogurt in our local store is very expensive. In my teens, I used to make homemade yogurt with regular milk and plain yogurt for starter, and I still had the yogurt maker. So, I decided to give it a try. I remembered a little from when I used to make yogurt, but I searched for more information to refresh my memory and to learn how to make it with coconut milk. This particular site had loads of info on it:  http://www.smallfootprintfamily.com/2009/04/25/homemade-coconut-milk-yogurt/ and is great to get started with. It gives a suggestion on how to make yogurt without a yogurt maker. 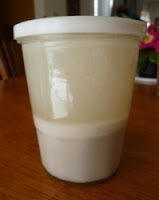 So, I got started. From my previous yogurt making days, I remembered heating the "milk" to about 180 degrees F and lowering it to 95 - 100 degrees F when adding the starter as mentioned in the recipe listed above. Sterilizing everything was necessary and I used my yogurt maker. I added a T. of honey for sweetener along with a packet of unflavored gelatin to my 5 cups of "milk". I did not have the probiotics mentioned, so I bought a 6 oz. vanilla coconut milk yogurt (they didn't have plain) and used it as a starter like I used to with dairy yogurt. This is generally not recommended and I am still searching for a dairy-free probiotic starter in my local stores. I chose to run the machine for about 10 hours and then put the yogurts in the refrigerator overnight. 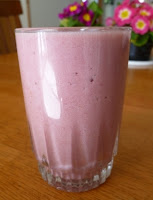 I tried a yogurt in the morning. It was very runny and a lot of watery liquid separated out of it as you can see in the picture. It tasted good, but I threw it away thinking it didn't work at all and no one would eat it. I hestitated to throw away the rest of them and put them back in the refrigerator. Then I decided to make a fruit smoothie using the whole jar of "yogurt", a handful of frozen strawberries and a banana. Delicious! I did not throw anymore away.

Since I used a coconut milk beverage the first batch, I am going to try adding regular coconut milk and more gelatin, and be a little more careful with the temperature (it got a little low) and see what happens before I write a recipe. Meanwhile, I think I'm on to something that we are really going to like.